To help meet a growing need for cybersecurity professionals, universities in the St. Louis region are banding together to share resources and provide their students with new opportunities as they prepare to enter the workforce.

The Gateway Higher Education Cybersecurity Consortium was initially formed in late 2017 by six St. Louis-area universities but in recent months has developed bylaws, hired an executive director and is attracting new members. Mary Abkemeier, a professor and chair of the math and computer science department at Fontbonne University, one of the consortium’s founding members, told EdScoop that by joining together, the universities hope to gain broader attention from the local cybersecurity industry and present their students with new opportunities for internships, training and potential job opportunities.

Abkemeier said she hopes the consortium will help its members build closer ties with cybersecurity companies. If they share which trends and skill sets are most needed, the schools can adapt accordingly, she said.

In addition to sharing hardware and software, and increasing the odds of obtaining grant funding and heightened attention from local companies, Abkemeier said the consortium also gives participating universities a ready avenue for collaborating on research. If a student at one university wants to study a specific topic, she said the consortium’s numbers increase the odds that a student will be able to find a professor already involved in the desired research.

In November, Abkemeier said the group also intends to hold a hackathon, a competition in which participants are challenged to create cybersecurity-themed applications.

“We can take their needs and their curriculum issues into consideration,” she said.

Fontbonne, a liberal arts Roman Catholic university of some 3,000 students, first offered its cybersecurity degree program in 2013 with just a handful of undergraduates. But Abkemeier said that now with 45 cybersecurity majors enrolled, it’s become the largest major in the university’s College of Arts and Sciences.

Abkemeier, who still teaches math classes after more than 40 years with the university, said she’s watched as cybersecurity has transformed from a discrete field of study into one that pertains to all of the other sciences.

“People are realizing security is something that needs to be included in other programs,” Abkemeier said. “Cybersecurity is not a standalone discipline anymore.”

“One of the motivations for creating it was needing people who are trained and educated in cybersecurity,” Abkemeier said. “There’s a need not just in the St. Louis area but throughout the world.” 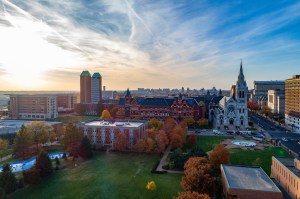