Federal agencies face more than a wage-scale disadvantage when competing with commercial firms for technology talent. They also have to overcome rigid hiring rules which tend to disqualify promising candidates and discourage others from seeing a path for growth, say private sector workforce experts.

Those hurdles are hardly new to government. However, they’re becoming more formidable as a broader U.S. shortage of technology and cybersecurity workers continues to hobble federal agency efforts to modernize their aging IT systems.

“While the federal government is continuously tackling our nation’s most critically important issues, which traditionally attract talented applicants, many agencies still rely on outdated business processes and technologies to hire — an experience that doesn’t reflect the dynamic importance of the mission,” observed Susan Fallon Brown, vice president of global strategy and business development for Monster Government Solutions. Fallon Brown’s team delivers software and services to help agencies find, hire, and onboard the best talent. 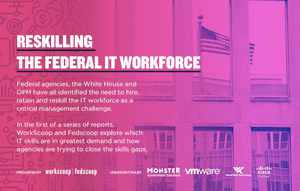 Federal IT leaders acknowledge hiring practices need to change. Fully 7 in 10 government IT leaders view continuing IT skills gaps as having a high or medium impact on the ability to deliver on agencies’ missions, according to a FedScoop and WorkScoop government study released in December.

Behind that view are mounting pressures to meet the expectations citizens have for digital services, the explosive growth of data and the rapid evolution of cloud-based computing services. Federal leaders say they are continually looking for alternative ways to attract, retain or retrain government IT workers and also meet the demand for newer IT skills.

The study, for instance, identified more than 20 IT skills that will be in high demand in the next two to three years in the federal government. It also highlighted the importance agencies place on seeking candidates who possess strong interpersonal skills and interdisciplinary backgrounds as well as technical skills.

“As emerging technologies continue to evolve and impact a federal agency’s day-to-day business processes, it is not uncommon that a skills gap among the workforce emerges. Most agencies across the federal government struggle to keep this gap from widening as technology evolves from year to year,” said Bryan Thomas, senior vice president of public sector for World Wide Technology.

Federal Chief Information Officer Suzette Kent argues the challenge goes beyond government personnel policies. The way the government and the private sector conceptualize recruiting, retaining, and training their security workforce should be reworked in the future, Kent argues.

She thinks both sectors need to do more to raise up talent. “We have to have public-private partnerships to increase our overall population. Let’s not fight for same one person — let’s have 10 people,” Kent said at a recent cybersecurity conference.

Scott Feinstein, senior director of sales for VMware’s government, education and health care business, says private sector firms face many of the same issues government does in attracting talent. That includes the need to recognize potential in the absence of experience. But they also have developed more flexible strategies to stock their talent pipelines.

“In the commercial sector, we have the ability to cultivate a set of skills at an earlier phase of someone’s career. For example, we can recruit someone from university who has high potential — as identified by their course of study, or someone who may be doing something a little different — and put them into a prospective opportunity,” he said.

VMware helps improve those candidates’ chances of success by assigning a business partner to mentor each one of their recruits, he said.

“I happened to be one of the leads and we are required to understand are our employee’s motivations, desires, wants… and offer them developmental opportunities… that’s patterned into something we know are the critical success factors for being able to perform that role,” he said.

“Typically when you look at the federal agencies and the way their job requisitions are posted, they are posted for a GS-9 or GS-10 based on their rigid structure around pay, tenure and whether they have specific skills or certifications,” he said.

That rigidity came under fresh criticism in recent weeks when the graduating class of an innovative Federal Cyber Reskilling Academy, developed by the U.S. Federal CIO’s office, failed to place a single graduate because it meant taking a cut in pay if they transitioned to a new cybersecurity job.

“I think that that rigidity sends a number of people in the wrong direction away from government,” said Feinstein. “You have to enable those individuals to be able to go out and obtain training in the areas where they want to develop and give the individual greater freedom to be carry out their desires while they’re in the role.”

“It’s not just about recruiting, it’s about hiring the right individuals, and keeping them engaged before and after their start date,” said Fallon Brown.  “An effective retention game starts with a strong fit between candidate and agency. Agencies that incorporate robust assessments in their hiring process can achieve greater alignment from the beginning between their needs and the applicant’s talents and goals.”

“While agencies generally do an OK job of selling their mission, prospective and existing employees also want to see a path for career growth,” she said.

“That’s not just exclusive to younger workers,” she added. “People at every age range want to grow, they want to learn, and they want a way to expand their skills.”

She pointed to a variety of ways respondents in the study said their agencies are trying to close their IT skills gap, including:

Fallon Brown also believes agencies aren’t taking full advantage of the 200,000 individuals transitioning out of the military every year. According to the study, 19% of agency IT leaders said that recruiting military veterans have been among the successful steps they’ve taken to bridge their IT skills gaps.

“A lot of these individuals have some very relevant skills and training plus they  have the diligence, work ethic, dedication and commitment to mission that lends itself to agency work,” she said.

CIOs should encourage a culture of learning