As President-elect Joe Biden prepares to lead the federal government come January 21, 2021, his office has tapped several former government IT leaders to volunteer on his transition team.

The Biden transition team includes hundreds of officials who are prepared to continue operations across agencies, many of which are in the midst of IT modernization initiatives. The current administration has so far refused to acknowledge the election results and stymied agencies from collaborating with the Biden transition team — a move experts warn as damaging to governance and security.

The list includes some former high-ranking technology officials, with most teams including at least one or two technology- or cyber policy-focused volunteers. The Biden transition team posted the full list of agencies and their review teams on its website Tuesday. Several names are familiar from the Obama administration: Michael Hornsby, a former acting CIO in the White House; the first U.S. CTO, Aneesh Chopra; former deputy U.S. CTO, Nicole Wong; and many alums of the U.S. Digital Service, set up under the Obama White House to help agencies modernize.

The vast majority of people currently working on agency review teams are not paid, with a handful receiving compensation from the Transition entity itself, according to the website. Once the Trump administration recognizes Biden’s election, federal employees will be detailed to work on the transition and paid through funds appropriated to the General Services Administration.

“During a transition, it’s often said that people are policy: the appointment of leaders across government who prioritize tech innovation and aren’t afraid to shake things up will be critically important to set agency priorities for the coming years,” Nate Ashton, managing director at Dcode, a government technology accelerator, told FedScoop.

It’s unclear what the impact a delayed transition will have on agencies’ modernization initiatives, but Ashton remains optimistic a new Biden administration will be able to continue digital transformation across the government.

“The biggest risks we see are in a delayed budget process and in missed opportunities to fund and sustain the digital transformation that has accelerated at most agencies this year in response to increased remote work and online citizen services during the pandemic,” he said.

Many of the transition officials served as career government employees or had experience as appointees in the Obama administration. Many come from legal, policy or management backgrounds. Here’s a thorough — but not necessarily exhaustive — list of transition officials with IT and cyber backgrounds, based on the volunteers’ public résumés:

Department of Health and Human Services

Office of Management and Budget 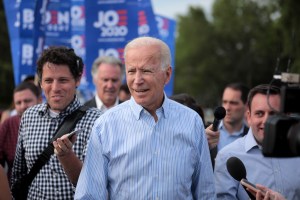