With the advent of the U.S. Chief Technology Officer position in 2009, the concept of digital technology got some prime real estate within the White House and, more broadly, the federal government. But what it means to be the CTO of a country like the United States wasn’t immediately clear.

From the moment in 2007 that presidential candidate Barack Obama announced his intention, if elected, to appoint the first U.S. CTO, analysts and commentators began speculating as to the wide range of authorities this role could potentially involve.

Would the CTO oversee technology within the White House? Help the president set policy? Bring “innovation” to executive branch agencies? What is a chief technology officer, anyway?

Thirteen years, two administrations and four U.S. CTOs later, a look through the projects pursued by this office reveals overlapping themes but malleable focal points. If there’s a general statement to be made about the job, it’s that a CTO’s agenda depends on the timing of their arrival, the political landscape and the individual’s fundamental philosophy about the role of technology in society. And while the title is borrowed from the corporate world, the actual job description is a lot more government-native — and it remains adjustable according to the priorities of a given administration at a given time.

Of course, the role, like all presidential appointments, may soon be taken over by a new administration and a new individual. Former Democratic candidate Andrew Yang, for example, has been suggested as a possible Biden administration CTO. What this will look like remains to be seen. But, perhaps a look back at the history of the role will give it some context.

Aneesh Chopra didn’t think he was lining up to become the first U.S. CTO when he joined the Obama transition team and helped to develop a job description for the role.

“I assumed it was going to go to a Silicon Valley luminary,” Chopra told FedScoop in an interview last fall. “I was hopeful I could join the administration as a CTO role for the Department of Health and Human Services.”

Still, he says, it was a “pleasant surprise” to get the offer.

While on the campaign trail, Obama made the pitch for a U.S. CTO role as part of his pro-innovation agenda. “In the 21st century, our economic success will depend not only on economic analysis but also on technological sophistication and direct experience in this powerful engine of our economy,” campaign material from the time reads. Obama also positioned the CTO as a government transparency driver — an administration official who would use technology to solicit feedback from citizens and use it to improve government functions.

It was Chopra, though, who operationalized this campaign concept and developed the three key responsibilities he says characterize the role. First, the U.S. CTO should think about how to apply technology, data and innovation to solve for economic growth. Second, the CTO should apply this same set of tools to the other “national priorities” of the administration. And third, the CTO should advocate for and support opening up government data for use by the private sector.

One big definitional element to Chopra’s tenure involved setting out the responsibilities of the new CTO vis-à-vis the federal chief information officer. The CTO sits in the White House Office of Science and Technology Policy, while the CIO is a position within in the Office of Management and Budget. To Chopra, it was very obvious that the CTO should complement but not compete with the Federal CIO. So while Obama’s initial pitch for the CTO position made more allusions to the kind of inside-government work that is done by the CIO’s office, Chopra decided to decouple the jobs.

“On a simple basis, you know, inside-outside,” Chopra said, describing the turf of each role. “The role of technology inside the government would be led by the CIO, the role of technology outside the government would be let by the CTO, and then a lot of collaboration at the interface between the inside and the outside around things like open data, open APIs and so forth.”

Chopra gives this example of how the roles and responsibilities were divided: It was Federal CIO Vivek Kundra who was in charge of creating data.gov in 2009, but then once created, Chopra says, his office “nurtured” the community of stakeholders surrounding the platform.

This close collaboration and division of responsibilities, he says, was an important feature of his time on the job.

Todd Park, the second U.S. CTO, also came to the role with data bona fides. He’d been at HHS working on open data initiatives, and he brought this enthusiasm for the power of open government data to create innovation and jobs with him.

Park continued this work in the White House and then, after the disastrous rollout of Healthcare.gov in 2013, spent a good deal of his attention reviving this signature administration initiative.

But the most distinctive feature of Park’s tenure, and arguably his legacy as CTO, would turn out to be something else: attracting new talent.

Park was a key figure in the 2012 launch of the Presidential Innovation Fellows program, which brings tech-savvy developers, designers and entrepreneurs into the federal government for a limited-term “tour of duty.”

“We’re bringing 15 of the most badass innovators on the planet to come into the government and work on five game-changing projects with the goal of delivering significant results within six months,” he told Fast Company in an interview in 2012.

The program, which has survived in the Trump presidency, in turn helped to create other government tech talent initiatives like the General Services Administration’s 18F team and the U.S. Digital Service. And the impact goes beyond short term appointments — many former PIFs have gone on to continue their careers in government technology in more permanent capacities.

Park also seems to have viewed the talent recruitment job as a long-term feature of the role. “You know, someday in the year 2040, the U.S. CTO is going to attend TechCrunch Disrupt to recruit the next generation of public servants,” he said. “And the people there are going to say, ‘Well, of course, the government is here. That’s not surprising at all.’”

After leaving the CTO role in 2014, Park returned to Silicon Valley (he’s quipped that his wife threatened to divorce him if he stayed in D.C. any longer), but continued to help recruit tech talent for the federal government.

Megan Smith, who left her job as a vice president at Google to become the third U.S. CTO, continued in much the same vein as her Obama-era predecessors.

“As described, [the job is] how do you help the president and the team harness the power of data, innovation and technology on behalf of the American people,” she told FedScoop in an interview in March. She talks about the job as being a “very plus-one role,” where the CTO is present to offer suggestions for ways in which technology might support other policy efforts, such as those to create more economic opportunity or a higher quality of life for American citizens.

In addition to this policy work, she continued to “incubate” government tech talent in her office — including scaling the Presidential Innovation Fellowship program and setting it up for permanence.

And Smith expanded the purview of her own role a little too.

“We added a lot of data science,” she said. For example, it was during Smith’s tenure that the chief data scientist role, filled by DJ Patil, was created at OSTP. And Smith’s office helped kick off The Opportunity Project in 2016 — an ongoing initiative that encourages private sector companies, nonprofit and academic organizations to tap into available federal open data to create new technology tools. 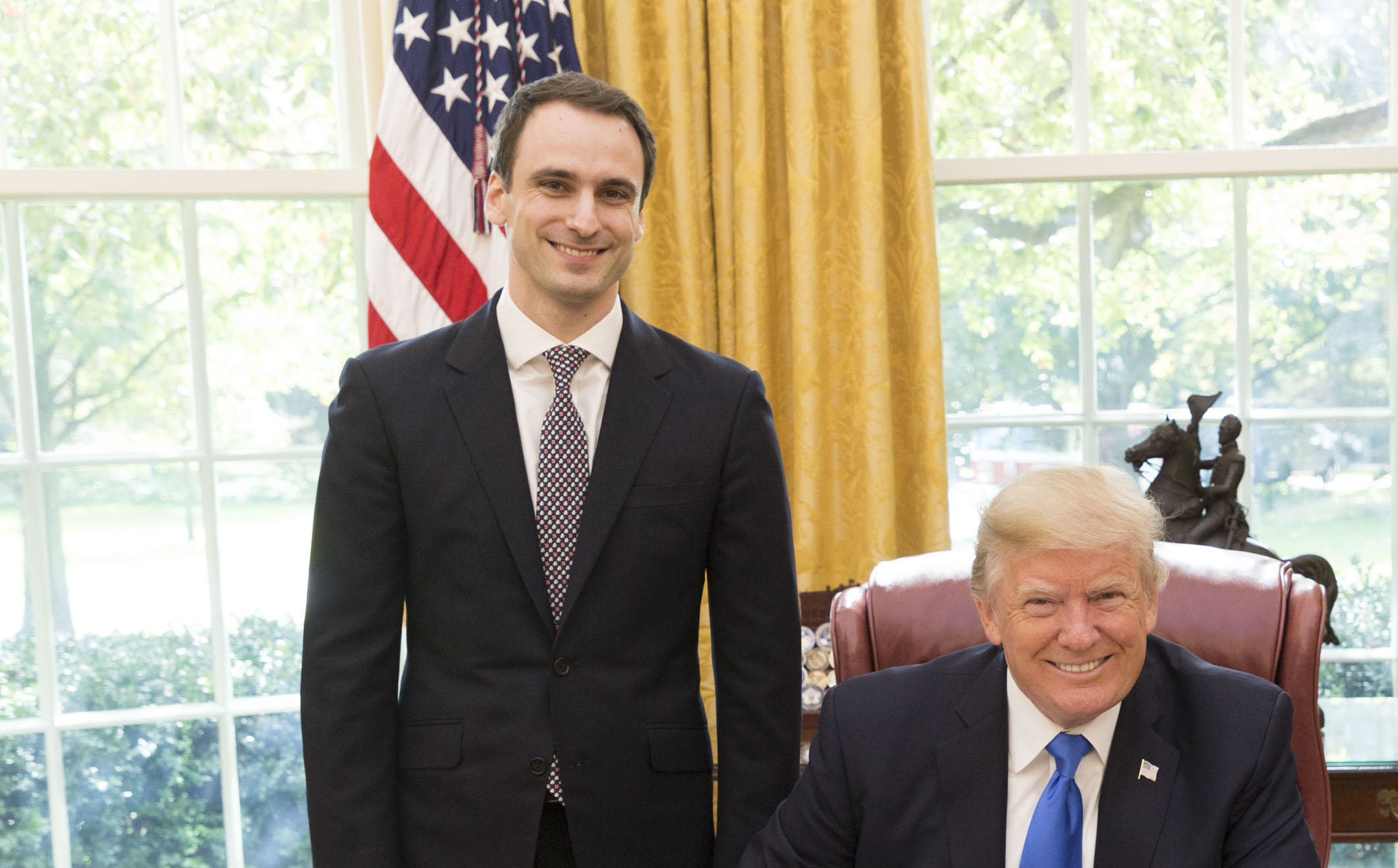 By his own admission, Michael Kratsios has taken a “very different track” compared to those who previously held his job.

Fresh from a job as chief of staff at Peter Thiel’s venture firm Thiel Capital, Kratsios was named deputy CTO in 2017. Officially, the CTO role remained empty until he was promoted and then Senate-confirmed to fill it in August 2019, making him the fourth person to hold the title and the first under President Trump.

The job is still fundamentally a policy advisory role, but one much more focused on policy that pertains to technology itself.

“What we’ve focused on, which I think is new and is also a reflection of the times we live in — this office has been, since inauguration, focused on driving national technology policy,” Kratsios told FedScoop in an interview. “We work to ensure American leadership in emerging technologies.”

This approach was evident very early on — a White House “tech week” in July 2017 focused on drones and the creation of 5G infrastructure. Artificial intelligence, too, has been a key priority.

“Everything from the changing face of artificial intelligence to quantum computing to 5G, even issues like internet privacy, um, encryption … these are all questions that are critical to our nation’s security, and our nation’s future, and it’s important to have a team that’s dedicated to driving policy outcomes in those areas,” Kratsios said.

“Broadly, across all tech issues, we focus on research and development, workforce issues and regulatory issues, and we drive and develop national strategies on our most important technology domains,” Kratsios said. He also highlighted the role he’s taken on the international stage, representing the White House at various intergovernmental group meetings.

This transition of focus at the office of the CTO was solidified by the creation of the Office of American Innovation, run by presidential son-in-law and advisor Jared Kushner. This new office, both Kratsios and Chopra noted, has taken the lead on some of the internal government tech modernization that previously might have been the purview of the CTO. It was OAI that originated the idea of the IT modernization Centers of Excellence now housed at GSA, for example — arguably one of the Trump administration’s flagship government IT projects.

Still, some priorities of the role have remained very similar over time, including the expansion of access to government data. And some mechanics of the role are similar too — Kratsios says that the “inside-outside” model created by Chopra still largely defines how his office interacts with that of the federal CIO. On the American AI Initiative, for example, one of Kratsios’ office’s flagship projects, OSTP collaborates closely with the Office of the CIO on the task of further opening data collected and held by federal agencies.

To Kratsios, the role as it is currently crafted reveals the priorities of the administration he works for. “For us to be able to have senior leadership here driving a singular issue, that being technology, is an indicator of how seriously this administration is taking tech policy,” he said.

And arguably there’s a certain conceptual similarity here too: Throughout the history of this role, revealing priorities has always been what it does best.

by Dave Nyczepir • 11 months ago
Culture

by Jackson Barnett • 11 months ago
Culture

by Dave Nyczepir • 11 months ago
The latest news and trends on the government IT workforce, delivered straight to your inbox.
SIGN UP FOR OUR WEEKLY NEWSLETTER.
Privacy Policy
We use cookies to provide you with the best experience across all Scoop News Group websites. By using Scoop News Group websites, you consent to the use of cookies. Learn more