A new “smart city” strategy will serve as a guide for Los Angeles to be connected, inclusive and efficient ahead of the 2028 Summer Olympic and Paralympic games — a “welcoming of the world” — the city’s chief information officer, Ted Ross, told StateScoop this week.

Though they’re seven years away, the 2028 Summer Games represent an “opportunity” for the city to establish itself as an intelligent and “highly digital” city, said Ross, who shared the 53-page plan with members of the Los Angeles City Council earlier this month. The strategy offers a preview of the technology Olympic ticket-holders could experience as soon as they arrive in the city in 2028, like ubiquitous 5G connectivity, internet-connected sidewalk kiosks, single-payment micro-transit options and electronic vehicle chargers.

However, much needs to be done to actually realizing that vision.

“It’s close enough to provide a target, but it’s also far away enough to accomplish some pretty aggressive goals.” Ross said of the plan. “So the idea of electronic vehicle charging being spread across the city — that’s not something you can do in a year. But it’s certainly something that, within the next seven years, you could be in a very solid place to receive people with electric cars.”

The strategy categorizes dozens of city agencies by how they’ll integrate themselves into the city’s overarching smart-city plan. The sanitation department, for example, will be tasked with contributing to the growth of digital services, smart infrastructure and data analysis; the chief legislative analyst office will be asked to help with governance and digital inclusion.

Certain agencies will be expected to work with one another to overcome a list of challenges that Ross identified, with the help of working groups that began meeting virtually during the COVID-19 pandemic. Agencies that play a role in improving the city’s infrastructure need to better inventory the location and type of every sensor in the city ahead of 2028 and expand the city’s fiber optic cable to ensure that every neighborhood is covered, Ross said.

Nothing is set in stone just because it’s in the strategy, Ross said. But each component that’s listed — infrastructure, data, digital inclusion, digital services and governance — has a timeline expected to result in a more connected city by the opening ceremony in July 2028.

Ross did not include a price tag on his new strategy, though city officials have previously estimated that the 2028 Summer Games will cost Los Angeles about $7 billion to host the event.

Some projects that will rely on artificial intelligence — such as the city’s 311 platform — aren’t scheduled to be finished until 2026 because the city is waiting for the technology to advance. Meanwhile, projects that rely on robotic process automation and blockchain, which Ross and his team are “pretty confident in,” will be prioritized in the next two years.

Ross and his boss, Mayor Eric Garcetti, have long embraced the “smart city” moniker, with recent initiatives including a new single sign-on platform for accessing city services online and the launch of an “everything under the sun” approach to broadband connectivity. More ambitiously, Garcetti recently announced plans to launch an “urban air taxi” service, relying on an upstart aircraft manufacturer that has only conducted a handful of test flights.

The new Olympic smart-city strategy aims to integrate all those efforts under one collaborative roof, rather than “fragmented,” incremental improvements, Ross said. If the city stayed on its current pace, “there would be technology, but the technology would be case-specific and it wouldn’t integrate with any other technology.” 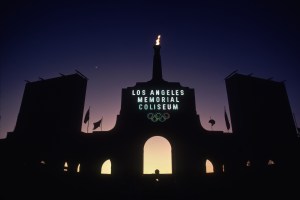 Los Angeles prepares to be ‘smart’ ahead of 2028 Olympics