Katrina Flory spent a decade as Ohio’s No. 2 technology official, under a succession of governors and chief information officers. But when she was named statewide CIO earlier this month, it was after an effusive endorsement by her predecessor, Ervan Rodgers, who’d held the role since early 2019.

During her time as deputy CIO, Flory oversaw the development systems including the Ohio Administrative Knowledge System, or OAKS, the state’s enterprise resource planning system; the Ohio Business Gateway tax-filing platform; the state’s eLicense system, which supports professional certifications; and the InnovateOhio digital-services platform. In taking the top job, she’ll now also lead the state government’s IT planning as agencies begin to return to their offices after more than a year away due to the COVID-19 pandemic.

In an interview with StateScoop last week, Flory described how the IT environment she leads today has come along from the one she encountered when she started working in state government. For one, things are much more consolidated, from correspondence and data storage to shared services that manage the state’s workforce and finances.

“Just 10 years ago, we had 19 email systems,” she said. “We had agencies on their own email systems. That’s not a thing anymore. We’re all on Office 365. We also had servers scattered all about in data centers and closets. Those are all centralized now in our State of Ohio computer center. That infrastructure consolidation and optimization, that’s been tremendous.”

Flory also said her office is much more closely in tune with the state agencies it supports, holding meetings with agency CIOs every six weeks. Those IT leaders are also broken into smaller groups they can more closely collaborate on interagency projects.

Aside from managing the remote-work needs for a government of more than 50,000 workers, the Ohio IT department has also started adapting the state’s Multi-Agency Radio Communication System, a network used by first responders, for next-generation 911, Flory said. It also recently oversaw the launch of a new portal, data.ohio.gov as part of the InnovateOhio program, which is led by Lt. Gov. Jon Husted.

One of the main goals of the InnovateOhio program is to give Ohioans a consistent, unified experience across agencies’ digital presences, Flory said.

“You’re going to see more on the data portal, more on a user-experience side of things as agencies migrate their website to the platform,” she said. “They have a common look and feel, and there’s the accessibility built in all of those things.”

She also said she’s looking ahead to trying out new technologies like no-code and low-code application development, which allows users to build products by configuring data sets and visual widgets, rather than complex programming.

“I think the COVID pandemic brought to light some new opportunities,” she said. “We uncovered where there were some manual processes that needed addressing and systems that weren’t quite up to the task.”

Flory’s also preparing for Ohio state employees’ return to their offices. While the state is still finalizing its post-pandemic plans, Flory said many of the implementations over the past year — like increased use of VPNs and video conferencing — will stick around as the state moves toward more of a hybrid work culture.

“I think we’ll see the continued use of these tools, leveraging them moving forward, and having some level of work-from-home remaining,” she said.

And just as Rodgers, who’s now CIO for the shoe retailer Designer Brands, endorsed Flory to follow him, she was equally effusive toward her predecessor.

“Ervan definitely brought a special level of energy and enthusiasm to everything,” she said. “I think we both had the same kind of core values.”

One difference though, she said: She may not keep the call-and-response “O-H…I-O” chants that Rodgers led at every public appearance. 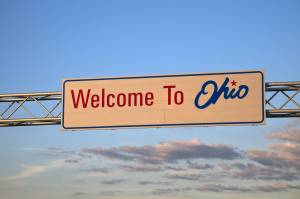