Now that the Department of Defense has transitioned away from its temporary virtual collaboration environment developed to support remote work during the pandemic, the Navy has launched its own more secure long-term solution and is working to onboard hundreds of thousands of sailors and Marines to the new platform.

The CVR environment, which was taken offline June 15, “was a godsend, but it wasn’t perfect. If it was perfect, we’d still be using it,” Galbraith said, explaining that CVR was only authorized for data transmission at the IL2 level for any information cleared for public release. The Department of the Navy‘s Navy-Marine Corps Intranet (NMCI) instance of Office 365 will also expire Oct. 1.

Flank Speed falls under the larger DOD365 cloud collaboration platform being rolled out across the department and is authorized up to IL5, accomodating controlled unclassified information that may deal with national security systems. The environment will offer access to Microsoft Teams, a terabyte of OneDrive cloud storage, and access to Microsoft 365’s Excel, Word, OneNote, and PowerPoint.

“It’s secured. It is cloud-based, like CVR. But in a very secure and defendable place where CVR had a couple of holes,” Galbraith said, later emphasizing the importance of “weaving that thread of security through everything — securing our data, securing our devices, securing our networks and our transport.”

He also called Flank Speed a “catalyst for our zero-trust architecture, which is built into that network and transport model that we have designed.”

Galbraith said it’s called Flank Speed — based on the Navy term for a ship’s maximum speed and given as an order to escape danger — because “we are moving very quickly” to give some 472,000 users access to the platform before the close of fiscal 2021.

The Navy began transitioning users to the new environment June 1, selecting an initial set of “260,000 current users of CVR and NMCI O365” who have begun moving over first, according to a release. As network performance gets better over time, more users will be gradually added.

Moving to CVR last year was “bumpy,” Galbraith said, and moving to Flank Speed will be no different.

“There’s some cultural change that’s going on,” he said. “So very similar to CVR where it was bumpy to begin with, our Flank Speed implementation in the Department of Navy, it’s going to be a little bumpy as well as we migrate users in a phased way, as we migrate and bring technical capabilities into that environment a piece at a time. And it’s happening very quickly, with every day new capabilities being added by the team.” 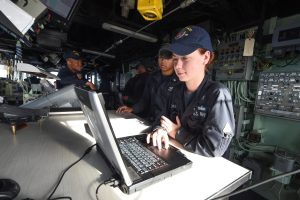 Navy looks to onboard 472,000 users to new virtual environment by end of September